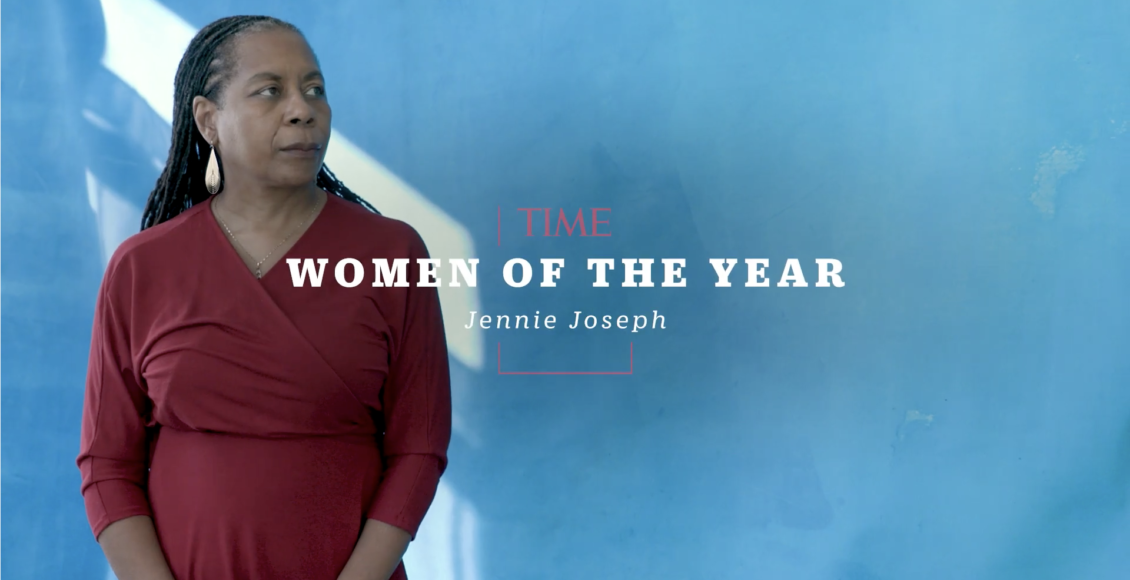 Why Jennie Joseph’s work is important. Read the full report on the US “having the highest maternal mortality rate among developed nations” here.

Deeply horrified by the American medical model’s treatment of pregnant women and babies when she arrived in the United States in the 80s, British-trained midwife Jennie Joseph successfully worked to create an evidence-based model of prenatal care for women, especially women of color who are three to five times more likely to die in childbirth in the US than white mothers. Her pioneering work includes providing human connection and empowering education, while also training mothers, fathers and extended family members to identify and arrest the cascade of interventions inside the hospital birth system that lead to complications and death.

Treating her patients well is not the only reason that Joseph has become one of the pre-eminent advocates of — and a national role model for — midwifery in the U.S. Her philosophy, which she calls the “JJ Way,” is much more ambitious. It’s about leveraging the power of midwifery to support a pregnant person before and after they give birth, to draw on community-based care, and to avoid unnecessary interventions. And it’s about using those methods not only to provide the best possible care for individuals, but also to disrupt a system that Joseph says has led to racial and socio-economic disparities in maternal health care.

Jennie Joseph’s interview with Kindred in 2018 aligned with the first annual Black Maternal Health Week from April 11-17, 2018, and the March for Moms on Washington, DC, on May 6, 2018, where women demanded the implementation of missing public policies and social safety nets to support mothers and babies found in most developed countries. As Jennie says in the Kindred interview, “the only way forward now is grassroots movements of individuals and organizations acting collaboratively and intentionally as a consciousness-raising movement to save ourselves from an unyielding, capitalist and deadly medical system.”

From the TIME interview here.

The culture around midwifery in the U.S. has begun to shift, driven in part by COVID-19, which overwhelmed hospitals and renewed interest in alternative ways to give birth, and in part by the advocates like the Congressional Black Maternal Health Caucus, which has succeeded in pushing legislation to improve maternal health. Last spring, Congress voted to allow states to extend Medicaid coverage for mothers up to one year after they give birth, and last fall, President Joe Biden signed the first bill in a package that would invest in studying and addressing racial disparities in maternal care.

Joseph is on the forefront of this shift. In 2020, she became the first Black person in the U.S. to privately own a nationally accredited midwifery school, where she is increasing the ranks of Black midwives, training other health workers around the country in midwifery principles, and developing a national network of like-minded providers.

Listen to and read the transcript for Kindred’s interview: Undermining A Deadly Maternal Health System.

Read the TIME magazine article Jennie Jospeh being included in this year’s 100 Women of the Year here.

Read the full report with statistics and charts: Maternal Mortality and Maternity Care in the United States Compared to 10 Other Developed Countries

Find more information about the March for Moms at www.improvingbirth.org

Jennie Joseph is a British-trained midwife, a women’s health advocate, the founder and executive director of Commonsense Childbirth Inc. and the creator of The JJ Way®. She moved to the United States in 1989 and began a journey that has culminated in the formation of an innovative maternal child healthcare system, markedly improving birth outcomes for women in Central Florida.

Jennie has worked extensively in European hospitals, American birth centers, clinics and homebirth environments. She has been instrumental in the regulation of Florida midwives since the 1990’s and has been involved in midwifery education since 1995. She is the chair of Florida’s State Council of Licensed Midwives. Currently she owns a Florida licensed midwifery school attached to The Birth Place, her nationally renowned birth center and maternity medical home in Winter Garden, Florida.

Due to the high prematurity rates experienced by low income and uninsured women she established an outreach clinic for pregnant women who are at risk of not receiving prenatal care. Her ‘Easy Access’ Prenatal Care Clinics offer quality maternity care for all, regardless of their choice of delivery-site or ability to pay, and have successfully reduced both maternal and infant morbidity and mortality in Central Florida. The Birth Place offers a unique opportunity for pregnant women to choose the site, setting and type of provider for their prenatal care and the delivery of their baby. Working in partnership with women by raising their status from patient to client, Jennie has empowered them to be proactive about their treatment and care. Fathers, family members, and friends are brought in as part of the mother’s team and engaged in the goal of helping her achieve a healthy, full-term pregnancy.

Jennie has pressed for linkages and collaboration with other public and private agencies in an effort to maintain continuity of care for the safety of her clients but also in order to bridge the gap between America’s maternity care practitioners. She has developed and administers perinatal professional training and certification programs to address the health care provider shortage, diversify the maternal child health (MCH) workforce and address persistent racial and class disparities in birth outcomes. There are both quantitative and qualitative studies underway regarding Jennie’s work as well as continuous reviews of the impact of her clinical and educational programs. Jennie’s model of health care, The JJ Way®, provides an evidence-based system to deliver MCH services which improve health, reduce costs and produce better outcomes all round.

Jennie Joseph has built up a reputation across the United States and has given numerous presentations, including a Congressional briefing on Capitol Hill, in order to discuss the statistical data as well as describe practical solutions to improving birth outcomes. Jennie is a regular presenter at maternal child health conferences and organizations; she has a leadership position amongst US and international midwives movements and is a subject matter expert on racial and perinatal disparities in the USA.

Jennie firmly believes in patient-centered, woman-centered care and works tirelessly to support the systems, providers and agencies charged with delivering that type of care. “Until women and their loved ones feel that they have enough knowledge and agency to be part of the decisions around their care and until they have access to the education and support that they are lacking, they will continue to be at risk.”-Jennie Joseph

Is “Identification With The Oppressor” Taking Over The Meaning Of…

Exploring the Intersection of Midwifery and Prenatal Psychology with Mary Jackson

An Interview With Ina May Gaskin, Godmother Of Modern Midwifery