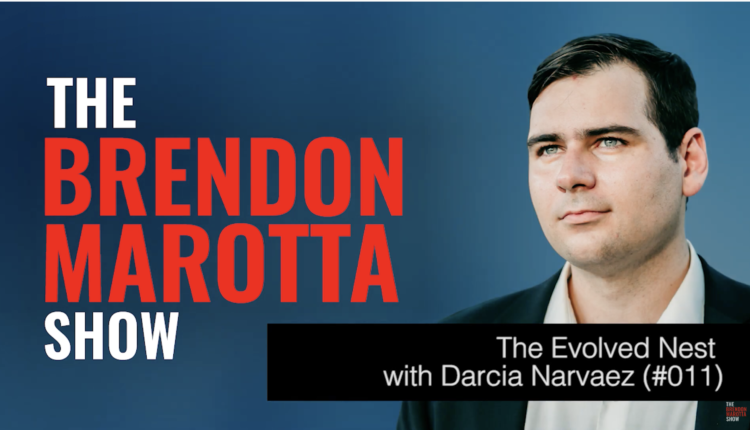 What if you had the chance to ask Darcia Narvaez, PhD, about our millions-year-old neurobiological plan for your baby’s health before they were born? In this podcast, Brendon Marotta earnestly and intentionally explores the Evolved Nest’s award-winning science with Darcia Narvaez, PhD. His love for his unborn child leads the way in fearlessly exploring the baby’s needs and how to meet them in a culture that does not support nurturing, or parents, or babies, or families.

We love this podcast and highly recommend it to anyone who is just learning about the Evolved Nest. Get comfortable and enjoy this fantastic interview – and the jaw-dropping science – behind humanity’s Evolved Nest.

Learn more about the Evolved Nest in the new short film, Breaking the Cycle.

Read about the Evolved Nest from Darcia on Kindred.

Visit the Evolved Nest’s website to learn more about the science.

Brendon Marotta first became interested in filmmaking at age fourteen, after watching a film critic break down the original Star Wars trilogy shot by shot. In high school, he began working as a P.A. on low-budget horror films and directed and edited over thirty short video projects. Brendon graduated from the University of the North Carolina School of the Arts in 2010 with a B.F.A. in film editing & sound, where he worked in every major role on a film set.

In 2013, he completed a year-long Meisner Acting program at the Waterfront Playhouse & Conservatory. In 2014, a feature he edited was selected to premiere at the Austin Film Festival and won the Narrative Feature Audience Award there. In 2017, he completed American Circumcision, his first feature-length documentary as director, which won multiple awards at film festivals, toured across the country, and played on Netflix. The film is currently available on Vimeo, Amazon, and iTunes.

Brendon has spoken across the world at multiple conferences including the International Congress for Association for Prenatal and Perinatal Psychology, International Conference on Men’s Issues, and International Symposium on Genital Autonomy and Children’s Right’s. In 2020, he published his first non-fiction book, The Intactivist Guidebook, which offers strategies for social change, and is set to publish his first novel by the end of the year.

In addition to his artist accomplishments, Brendon has an interest in healing and change work. He has studied hypnosis and NLP (Neuro-Linguistic Programming). In 2019, he became a certified practitioner of the Completion Process, a method for resolving emotional trauma.