This post is part one of a three part series:

Part Two: Should We Be Worried That Misdeveloped Males Run The World?

We often hear that boys need to be toughened up so as not to be sissies. Parent toughness toward babies is celebrated as “not spoiling the baby.” Wrong! These ideas are based on a misunderstanding of how babies develop. Instead, babies rely on tender, responsive care to grow well—with self-control, social skills and concern for others.

A review of empirical research just came out by Allan N. Schore, called “All our sons: The developmental neurobiology and neuroendocrinology of boys at risk.”

This thorough review shows why we should be worried about how we treat boys early in their lives. Here are a few highlights: 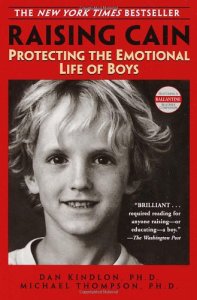 Boys mature slower physically, socially and linguistically.
Stress-regulating brain circuitries mature slower in boys prenatally, perinatally and postnatally.
Boys are affected more negatively by early environmental stress, inside and outside the womb, than are girls. Girls have more built-in mechanisms that foster resiliency against stress.

How are boys affected more than girls?

At six months, boys show more frustration than girls do. At 12 months boys show a greater reaction to negative stimuli.
Schore cites the research of Tronick, who concluded that “Boys . . . are more demanding social partners, have more difficult times regulating their affective states, and may need more of their mothers support to help them regulate affect. This increased demandingness would affect the infant boys’ interactive partner” (p. 4).
What can we conclude from the data?

Boys are more vulnerable to neuropsychiatric disorders that appear developmentally (girls more vulnerable to disorders that appear later). These include autism, early onset schizophrenia, ADHD, and conduct disorders. These have been increasing in recent decades (interestingly, as more babies have been put into daycare settings, nearly all of which provide inadequate care for babies).

Schore states, “in light of the male infant’s slower brain maturation, the secure mother’s attachment-regulating function as a sensitively responsive, interactive affect regulator of his immature right brain in the first year is essential to optimal male socioemotional development.” (p. 14)

“In total, the preceding pages of this work suggest that differences between the sexes in brain wiring patterns that account for gender differences in social and emotional functions are established at the very beginning of life; that the developmental programming of these differences is more than genetically coded, but epigenetically shaped by the early social and physical environment; and that the adult male and female brains represent an adaptive complementarity for optimal human function.” (p. 26)

What does inappropriate care look like in the first years of life?

“In marked contrast to this growth-facilitating attachment scenario, in a relational growth-inhibiting postnatal environment, less than optimal maternal sensitivity, responsiveness, and regulation are associated with insecure attachments. In the most detrimental growth-inhibiting relational context of maltreatment and attachment trauma (abuse and/or neglect), the primary caregiver of an insecure disorganized–disoriented infant induces traumatic states of enduring negative affect in the child (A.N. Schore, 2001b, 2003b). As a result, dysregulated allostatic processes produce excessive wear and tear on the developing brain, severe apoptotic parcellation of subcortical–cortical stress circuits, and long-term detrimental health consequences (McEwen & Gianaros, 2011). Relational trauma in early critical periods of brain development thus imprints a permanent physiological reactivity of the right brain, alters the corticolimbic connectivity into the HPA, and generates a susceptibility to later disorders of affect regulation expressed in a deficit in coping with future socioemotional stressors. Earlier, I described that slow-maturing male brains are particularly vulnerable to this most dysregulated attachment typology, which is expressed in severe deficits in social and emotional functions.” (p. 13)

What does appropriate care look like in the brain?

“In an optimal developmental scenario, the evolutionary attachment mechanism, maturing during a period of right-brain growth, thus allows epigenetic factors in the social environment to impact genomic and hormonal mechanisms at both the subcortical and then cortical brain levels. By the end of the first year and into the second, higher centers in the right orbitofrontal and ventromedial cortices begin to forge mutual synaptic connections with the lower subcortical centers, including the arousal systems in the midbrain and brain stem and the HPA axis, thereby allowing for more complex strategies of affect regulation, especially during moments of interpersonal stress. That said, as I noted in 1994, the right orbitofrontal cortex, the attachment control system, functionally matures according to different timetables in females and males, and thus, differentiation and growth stabilizes earlier in females than in males (A.N. Schore, 1994). In either case, optimal attachment scenarios allow for the development of a right-lateralized system of efficient activation and feedback inhibition of the HPA axis and autonomic arousal, essential components for optimal coping abilities.” (p. 13)

NOTE: Here is a recent article explaining attachment in the New York Times and here are Kindred’s articles on attachment and bonding.

1. Realize that boys need more, not less, care than girls.

2. Review all hospital birth practices. The Baby-Friendly Hospital Initiative is a start but not enough. According to a recent review of the research, there is lot of epigenetic and other effects going on at birth.

Separation of mom and baby at birth is harmful for all babies but Schore points out how much more harm it does to boys:

“Exposing newborn male . . . to separation stress causes an acute strong increase of cortisol and can therefore be regarded as a severe stressor” (Kunzler, Braun, & Bock, 2015, p. 862). Repeated separation results in hyperactive behavior, and “changes . . . prefrontal-limbic pathways, i.e. regions that are dysfunctional in a variety of mental disorders” (p. 862).

3. Provide responsive care. Mothers, fathers and other caregivers should avoid any extensive distress in the child—“enduring negative affect.” Instead of the normalized harsh treatment of males (“to make them men”) by letting them cry as babies and then telling them not to cry as boys, by withholding affection and other practices to “toughen them up,” young boys should be treated in the opposite way: with tenderness and respect for their needs for cuddling and kindness.

Note that preterm boys are less able to spontaneously interact with caregivers and so need particularly sensitive care as their neurobiological development proceeds.

4. Provide paid parental leave. For parents to provide responsive care, they need the time, focus and energy. This means a move to paid maternal and paternal leave for at least a year, the time when babies are most vulnerable. Sweden has other family-friendly policies that make it easier for parents to be responsive.

5. One other thing I did not address that Schore does is the effects of environmental toxins. Young boys are more negatively affected by environmental toxins that also disrupt the brain’s right hemisphere development (e.g., plastics like BpA, bis-phenol-A). Schore agrees with Lamphear’s (2015) proposal that the ongoing “rise in developmental disabilities is associated with environmental toxins on the developing brain.” This suggests we should be much more cautious about putting toxic chemicals into our air, soil and water. That is a topic for another blog post.

Of course, we should not just worry about boys but take action for all babies. We need to provide nurturing care for all children. All children expect and need, for proper development, the evolved nest, a baseline for early care which provides the nurturing, stress-reducing care that fosters optimal brain development. My lab studies the Evolved Nest and finds it related to all the positive child outcomes we have studied.

Next post: Why Worry About Undercared for Males? Messed up Morals!

Schore, A.N. (1994). Affect regulation the origin of the self. The neurobiology of emotional development. Mahwah, NJ: Erlbaum.

Allan Schore On The Neurobiology Of Secure Attachment