Evil Babies And Parenting: Why Is Child Abuse Still So Prevalent?

Read Part One, Adult Justification Of Child Humiliation And Treatment, and Part Two, How To Stop Disrespecting Your Children, of this three part series on Alice Miller’s work.

We discussed in Part 2 how abusive behaviors are typically passed on from generation to generation through parenting practices— unless the parent becomes self aware and works through some of the emotions bottled up since childhood. 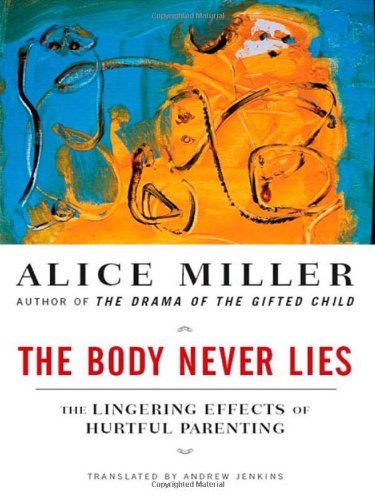 As Alice Miller pointed out, culture can be a barrier to caring well for babies. There are some deeply held notions about children within Western cultures that are contrary to human development.

“At times one gains the impression that for many people the topic of “childhood” is enough to automatically evoke derision, arrogance, meanness, or even illegal acts—precisely the same attitudes and behavior they themselves experienced and learned in their childhood from adults.” (Miller, 1990, p. 87)

Alice Miller, who lived in Switzerland, notes that when she gave lectures to clinical staff, no matter what she said they stuck to their beliefs that babies are born with “destructive drives” (e.g., Freud’s “death” drive). As an instance of common beliefs in the 20th century, Miller quotes the well-respected psychoanalyst Edward Glover:

“Expressing these technical discoveries in social terms we can say that the perfectly normal infant is almost completely egocentric, greedy, dirty, violent in temper, destructive in habit, profoundly sexual in purpose, aggrandizing in attitude, devoid of all but the most primitive reality sense, without conscience or moral feeling, whose attitude to society (as represented by the family) is opportunist, inconsiderate, domineering and sadistic. And when we come to consider the criminal type labeled psychopathic it will be apparent that many of these characteristics can under certain circumstances persist into adult life. In fact, judged by adult social standards the normal baby is for all practical purposes a born criminal.” (from a 1922 address and published in The Roots of Crime, 1960) (Miller, 1990, p. 40)

Just think: if you believed your baby was born a criminal how you would want to coerce, ignore, neglect and treat him harshly with other punishments to “teach him a lesson” about denying his evil self. Unfortunately, the notion of original sin (from Augustine around 400 AD) promotes the idea that children are born immoral. If the parents act on a notion of baby’s spirit=evil, the parents are likely to try to kill the child’s spirit, something that Alice Miller documents in her books (see especially, For Your Own Good). The child is taught to suppress his own spirit and instead follow a set of adult rules (whatever the parents decide those are) as a sign of goodness. The child will forever be wounded but think it normal.

“A human being born into a cold, indifferent world will regard his situation as the only possible one. Everything that person later comes to believe, advocate, and deem right is founded on his first formative experiences…The repression of past torments and its cost render people deaf to the screams of children and blind to the obvious connections…the factors so clearly revealed by the statistics are ignored to block the eruption of once repressed pain, to prevent the recognition of the truth.” (Miller, 1990, p. 3)

Why do parents continue to harm their children across generations?

Again, the culture shapes parents notions too of what is appropriate. A culture that condones child abuse will perpetuate it. As I have written, bullying starts with babies. Adults often have attitudes that lead to child abuse but it is surrounded in denial on all sides.

“Again and again the child’s share of the blame is looked for and found, with the result that only extremely brutal cases is the term “child abuse” mentioned, and even then with reservations, with the broad spectrum of psychic mistreatment is disputed or even totally denied. In this way the victims’ voices are silenced almost before they are raised, and the truth, the whole objective truth, of the facts remains in obscurity.” (Miller, 1990, pp. 94-95)

Thankfully, things have changed, at least in the USA, where the government requires professionals who work with children to report to the state signs of possible child abuse.

Second, parents’ suppression of their own early experience is one of the reasons that child abuse continues. As noted in Part 1 and Part 2, parents have to consciously address their childhood trauma for it to be healed.

“In my generation the child learned to identify completely with parents’ perspective and never to question it. In the works of all the authors I know, I have observed that, despite occasional rebellion, they end up defending their parents against their own accusations. Accusations against parents are often associated with mortal fears, not only because of real threats but because a small child feels he is in deadly danger if he loses the love of the person closest to him.” (Miller, 1990, pp. 96-97)

Third, Miller points out that babies, like the life force itself, are resilient in many ways, which Miller says misleads adults.

“The great adaptability of the newborn infant to our cruel world, this toughness, has since time immemorial misled people to believe that one can inflict anything on a child with impunity: completely neglect him, hold lighted cigarettes against his skin, shake him, throw him against the wall, yell at him. Until recently no one corrected these notions because in their defenselessness injured children could not speak about the torments they were exposed to; their signals went unnoticed. And later, as adults, they had themselves forgotten such experiences, or at least the memory was not vivid enough to cause them to speak of them. But somehow they must have known, their brains had obviously stored the knowledge, for in a sort of compulsive repletion they passed on their traumatic experiences to their children, again oblivious to the consequences.” (Miller, 1990, p. 4)

Fourth, parents and the culture misunderstand the needs of babies.

Babies are born 9-18 months early, compared to other animals (Trevathan, 2011). They really should be in the womb another 18 months (!) so their first couple of years should be a warm, supportive nest. Early experience has profound effects on the baby’s psyche:

“A baby requires the certainty that he will be protected in every situation, that his arrival is desired, that his cries are heard, that the movements of his eyes are responded to and his fears calmed…The only possible recourse a baby has when his screams are ignored is to repress his distress, which is tantamount to mutilating his soul, for the result is an interference with his ability to feel, to be aware, and to remember.” (Miller, 1990, p. 1, 2)

“When this innate ability to feel cannot blossom, a person cannot know later in life what it means, for example, to be defenseless and so is incapable of providing his or her own child with the protection and love in which this child will likewise stand in urgent need. Parents who have never known love, who on coming into the world met with coldness, insensitivity, indifference, and blindness and whose entire child and youth were spend in this atmosphere, are unable to bestow love—indeed, how can they, since they have no idea of what love is and can be? (Miller, 1990, p. 2)

USA’s institutions have built in all sorts of ways to undermine baby wellbeing (e.g., by not ensuring paid parental leave for mothers and fathers, not providing affordable housing or living wages so parents don’t have to work multiple jobs, etc.).

Many hospitals still undermine baby and mother wellbeing through not honoring baby’s own birth timing, imposing painful procedures, separating mother and child and other harsh treatments (though see the Baby-Friendly Hospital Initiative started in the world in 1990 and in the USA in 2011).

The effects of mother-baby separation are noted by Miller (1990). She discusses a woman whose first child was separated from her after birth and how desperate and depressed she felt, with inflamed breasts. The second child was placed on her stomach right after birth. “Her utter delight over this close and blissful sharing enabled her for the first time to feel the old pain of her loneliness as a baby. Moreover, she found that in the ensuing years her relationship with this second child was much less “burdensome” and surprisingly carefree.” (Miller, 1990, p. 84)

One last thing about child mistreatment from Alice Miller relevant to the USA’s culture of media violence:

“In my view a child who harbors no pent-up rage will show no interest in brutal and sadistic TV program. However , brutal programs are avidly absorbed by children who have never been allowed to defend themselves against overt or subtle tormenting at home or how, for other reasons, can never articulate their feelings—for example, to spare a threatened parent. So they can satisfy their secret longings for revenge by identifying with what they see on TV. These children already carry within them the seeds of future destructiveness. .. the child learns cruelty not by watching TV but always by suffering and repressing. (Miller, 1990, p. 44)

Could the popularity of vicious* TV/movies, which dominate Hollywood movies and television shows, be sign of pent-up childhood rage?

Ten Things Everyone Should Know About Babies

Five Things NOT to Do to Babies

*NOTE: I say “vicious” to refer to the focus on harming or deceiving others, or showing in detail how to be evil.

PART 2: How to Stop Disrespecting Your Children

PART 3: Evil Babies and Parenting (Above)

The Wise Parent Study – Interview With University of Wisconsin Researcher