Food labeled “natural” raked in more than $40 billion in U.S. retail sales over the past 12 months.

It’s crazy to give that much value to something that has absolutely no definition.

According to the Wall Street Journal, “the Food and Drug Administration has no definition, says a spokeswoman, but rather a long-standing policy that it considers “natural” to mean that “nothing artificial or synthetic (including all color additives regardless of source) has been included in, or has been added to, a food that would not normally be expected to be in the food.” 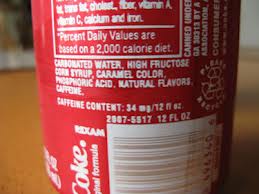 And while Coca Cola hasn’t gone so far as to slap a “natural” label on their sodas, women are taking on the giant soda maker for false and misleading claims on their labels.

So what is the stuff?

Phosphoric acid is a colorless, odorless solid or a thick, clear liquid.  It can be used as acidifying agent to give sodas a tangy flavor.  It is also commonly used for rust removal.

It is used in rustproofing metals, fertilizers, detergents, foods, beverages, and water treatment.

You can see where these women might have a point.  Why in the world is this industrial chemical being put into cola in the first place?

After all, it’s used in fertilizers, livestock feed, soaps, polishes, dyes, polishing metals and in many other nonfood products.

It’s added to soft drinks to provide a sharper, tangy taste and to help slow the growth of molds and bacteria in sugary formulas.

In other words, it helps cola companies lengthen the shelf life of their products and enhance their profitability.

The flipside is that its use makes sodas incredibly acid.  So how do companies like Coca Cola account for all of that acidity?  They add huge amounts of sugar to mask it.

So what’s the risk?

And while it does occur naturally in some foods like milk, meat, poultry, fish, nuts, and egg yolks, the percentages are low (0.1%-0.5%).

A study published in the “Archives of Pediatric and Adolescent Medicine” in 2000 found that athletic teen girls who consume colas have five times the risk of bone fractures as those who don’t consume cola drinks.

According to Livestrong, “ a team from the National Institutes of Health investigated the dietary habits of 465 people with chronic kidney disease and 467 healthy subjects. The results, published in the journal “Epidemiology” in July 2007, found that drinking two or more colas a day, diet or regular, was associated with a twofold risk of developing kidney disease. The clear sodas that contained citric acid didn’t have the same risk.”

Attorneys claim that they have a hall pass because the FDA has never defined the term, “natural.”  As the number of  lawsuits over the use of the term grows, a growing number of food and beverage companies are ditching the term “natural” on the label.

The beverage industry is going to be quick to defend this ingredient that helps shore up their earnings, but one take away is clear: if you tend to sip soda, do so mindfully. Your body isn’t a rental car.  It’s the only ride you’ve got.

A former financial and food industry analyst, who had the opportunity to meet Goldman Sachs' Henry Paulson, Ebay's Meg Whitman and Martha Stewart while working on the desk, Robyn O'Brien is an author, public speaker, strategist and mother of four.  She brings insight and detailed analysis to her research on the health of the American food system as documented in her first book, The Unhealthy Truth, and has been called "food's Erin Brockovich" by the New York Times.

Her work has appeared on CNN, the Today Show, Good Morning America, FOX News, in the Washington Post and countless media outlets, and she currently writes a popular column for Prevention while serving as the Executive Director of the AllergyKids Foundation and doing strategic advisory work for companies making trend-setting changes in the food industry.

Robyn has been named by SHAPE Magazine as one of 2009’s “Women To Shape the World”, along with First Lady Michelle Obama, by Forbes Woman as one of “20 Inspiring Women to Follow on Twitter,”and by The Discovery Channel as one of its 15 Top Visionaries. Her TEDx talks have been widely received.

Recruited by institutions like Enron and the oil and gas industry, Robyn is the founder of the AllergyKids Foundation, a 501 c3 non-profit.  The mission of AllergyKids is to restore the health of American families by addressing the needs of the 1 in 3 American children that now has allergies, autism, ADHD and asthma and the role that additives in our food supply are having on our health.  The Foundation also works closely with those fighting cancer, particularly those with specific dietary needs.

On Mother’s Day 2009, Random House published her acclaimed book, "The Unhealthy Truth: How Our Food Is Making Us Sick and What We Can Do About It" and today, Robyn is regarded as a food and health expert and sought after speaker who lectures and writes extensively, addressing the economic burden that disease is placing on our families, our companies and our country.

Robyn earned an MBA on a full scholarship, graduating as the top woman in her class.  And today, her work is recognized and supported by renowned individuals such as Dr. Oz, Robert Kennedy Jr., Ted Turner, Bonnie Raitt and Prince Charles. She serves on the Board of Directors of Healthy Child Healthy World and Just Label It .  She also serves on advisory boards for several companies.

Since giving her first TEDx talk in which she discusses research she conducted six years ago, the World Health Organization now reports that the U.S. ranks 7th out of almost 200 countries worldwide in cancer rates due to the remarkable efforts to reduce tobacco use in our country. And she firmly believe that while we can't change the beginning of our stories, we can change the end.  And hope is the knowledge that change is possible, even when it seems hard to imagine.