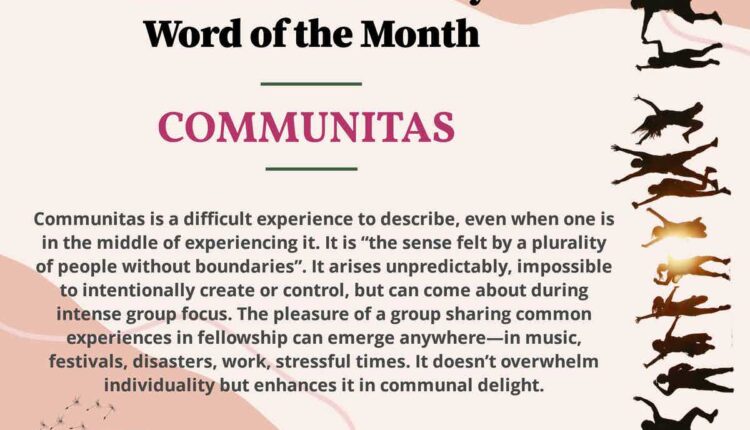 From the post by Darcia Narvaez, PhD: Collective Joy Through Joint Social Flow

Communitas is a difficult experience to describe, even when one is in the middle of experiencing it. It is “the sense felt by a plurality of people without boundaries” (E. Turner, 2017, p. 1). It arises unpredictably, impossible to intentionally create or control, but can come about during intense group focus. The pleasure of a group sharing common experiences in fellowship can emerge anywhere—in music, festivals, disasters, work, stressful times. It doesn’t overwhelm individuality but enhances it in communal delight.

Edith Turner writes: “[Communitas] does not merge identities; the gifts of each and every person are alive to the fullest. It remains a spring of pure possibility, and it finds oneness, in surprise. That is, it has agency, and seems to be searching. It has something magical about it. There appear to be innumerable threads of crisscrossing lines of meaning, flows of meaning…That is its nature.” (E. Turner, 2017, p. 3)

Communitas arrives unexpectedly, like the wind, warming up feelings toward the others.

“Communitas occurs through the readiness of the people—perhaps from necessity—to rid themselves of their concern for status and dependence on structures, and see their fellows as they are” (E. Turner, 2017, pp. 1-2).

Communitas has innumerable permutations but Turner suggests that it requires entering a liminal or negative space of disruption of prior assumptions, habits, expectations and status—an openness to new ways to flourish. This “negative capability,” letting go of preconceptions, scripts, aims, is required for creativity to bloom.

In communitas, “there is a loss of ego. One’s pride in oneself becomes irrelevant. In the group, all are in unity, seamless unity, so that even joshing is cause for delight and there is a lot of laughter” and gratitude (E. Turner, 2017, p. 3). It results in a type of synergy, a joint sense of flowing together, perhaps a type of limbic resonance among a group (Lewis, Amini, & Lannon, 2000).

R. Richard Sorenson (1998) illustrates this synergy and ongoing communitas in a group of New Guinea Fore boys in the forest. Thirteen-year-old Agaso found himself with a good shot at tree-dwelling animal but had poor arrows.

“Without the slightest comment or solicitation, the straightest, sharpest arrow of the group moved so swiftly and so stealthily straight into his hand, I could not see from whence it came. At that same moment, Karako, seeing that the shot would be improved by pulling on a twig to gently move an obstructing branch, was without a word already doing so, in perfect synchrony with Agaso’s drawing of the bow, i.e., just fast enough to fully clear Agaso’s aim by millimeters at the moment his bow was fully drawn, just slow enough not to spook the cuscus. Agaso, knowing this would be the case, made no effort to lean to side for an unobstructed shot or to even slightly shift his stance. Usumu, similarly synchronized into the action stream without even watching Agaso draw his bow, began moving up the tree a fraction of a second before the bowstring twanged. [Usumu] grasped the wounded cuscus before it might regain its sense and slipped out onto a slender branch that whizzed him down to dangle in the air an inch or so before Agaso’s startled face.” (p. 90)