The New Nature Movement 2017: Not Going Back To Nature, But Forward To A Nature-Rich Civilization

See the young people in the photo above? They’re our true leaders. Natural Leaders. They don’t demean others. They don’t exclude. They’re reaching out, reaching up.In 2017, they’re the leaders who give us hope.

For many of us, thinking about the future conjures up images from movies like Blade Runner, Mad Max, The Road: a post-apocalyptic dystopia stripped of nature and human kindness. We seem drawn to that flame, but it’s a dangerous fixation.
Not that there aren’t reasons to be discouraged. Among them, a society in which people retreat into silos of their own kind, hard times for those who have been left behind economically, decades of nature-deficit disorder among children and adults, climate change, biodiversity collapse. 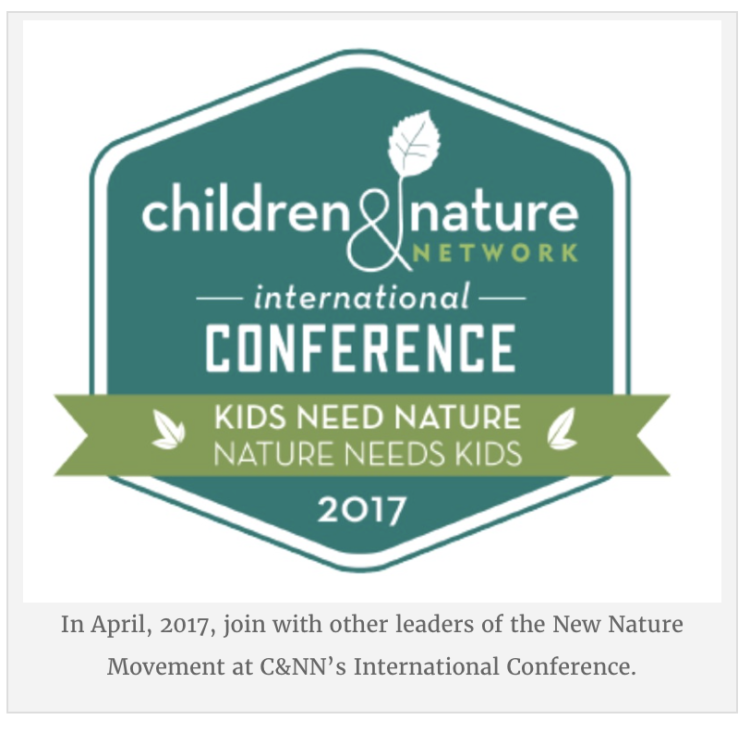 In April, 2017, join with other leaders of the New Nature Movement at C&NN’s International Conference.

Despite undeniable successes, environmentalism is in trouble: some polls and political developments suggest a public with diminishing regard for environmental concerns. Americans continue to care deeply about the environment, but progress suddenly seems blocked.
Here’s the problem with despair. It’s worth repeating. Often. Martin Luther King, Jr. taught us that any movement — any culture — will fail if it cannot paint a picture of a world that people will want to go to. This is why, more than ever, we need a new nature movement, one that includes but goes beyond the good practices of traditional environmentalism and sustainability, one that paints a compelling, inspiring portrait of a society that is better than the one we presently live in. Not just a survivable world, but a nature-rich world in which our children and grandchildren thrive.

Inchoate, self-organizing, this new nature movement is already beginning to emerge around the world. It revives old concepts in health and urban planning and adds new ones, based on recent research, that shows the power of nearby nature and wilderness to improve our psychological and physical health, our cognitive functioning, and our economic and social well-being. Colorado University professor Louise Chawla describes the basis of the movement as “the idea that, as humans, we cannot only make our ecological footprints as light as possible, but we can actually leave places better than when we came to them, making them places of delight.”

In The Nature Principle, I suggested a few tenets for the New Nature Movement. Among them:

The next wave of cutting-edge education will be the creation of natural learning environment, and the development of “hybrid minds.”
This movement isn’t about going back to nature, but forward to nature. The future will belong to the nature-smart.

Participants in the New Nature Movement include traditional conservationists, as well as proponents and producers of alternative energy, who create the underpinning. Physicians (particularly pediatricians) who prescribe nature experience and green exercise to their patients. Ecopsychologists, wilderness therapy professionals, and other nature therapists. Park professionals who help families fulfill their “park prescriptions.” Public health professionals and urban designers who work to increase nearby nature.

This worldwide movement to connect children to nature, which the Children & Nature Movement is helping to build, can be seen as both a model for and a subset of a larger new nature movement.

In September 2012, the World Congress of the International Union for the Conservation of Nature (IUCN) passed a resolution declaring that children have a human right to experience the natural world, an essential ingredient if nature is to protected from human excess — and a step toward seeking a similar declaration at the United Nations. At the same World Congress, leaders of national parks and protected areas throughout the world approved the “Jeju Declaration on National Parks and Protected Areas: Connecting People to Nature,” committing them to create a global campaign that recognizes the great contribution of these natural treasures to the health and resilience of people, communities and economies.

The children and nature movement has miles to go before it can declare anything approaching victory. But it has already made inroads in policy and, more importantly, has planted the seeds for self-replicating social change, including at least 109 regional and state campaigns that have brought together businesspeople, conservationists, healthcare providers and others.

These others include thousands of parents, teachers, law enforcement officials, librarians, artists, pediatricians, liberals and conservatives, anglers, hunters, and vegetarians. People who not only consume, but also restore nature. People who have found common cause.

The children and nature movement, like the larger new nature movement, is surprisingly diverse. Recent immigrants and inner-city youth are among the most persuasive advocates for nearby nature and outdoor experience — once they get a chance to have such experiences.

Not all of the individuals and groups I have mentioned would identify themselves as environmentalists. They do not necessarily see themselves as part of one movement —yet. However, consider the collective power if these forces came together to craft a positive vision of the future, a newer civilization based on a transformed human relationship with the natural world. We don’t have to agree on everything to reach that goal.

But we must agree that our species’ connection to nature is fundamental to our shared humanity — and to the future of Earth itself.
Still feeling down about the future? Take another look at the faces of the young people in the photos above. Please join them.

“That Forever Empty” Feeling: What Is It? How Do We Anesthetize Ourselves? Or Wake Up?

What Adults Did To Me At Birth: A Baby’s Point Of View

Digital Dictators, Colonization of Our Bodies, and the Power of the Regeneration…

Digital Dictators, Colonization of Our Bodies, and the Power of the…