The Imprint: What Is It And How Is It Impacting Your Life Now?

WATCH THE FILM ON DEMAND HERE. 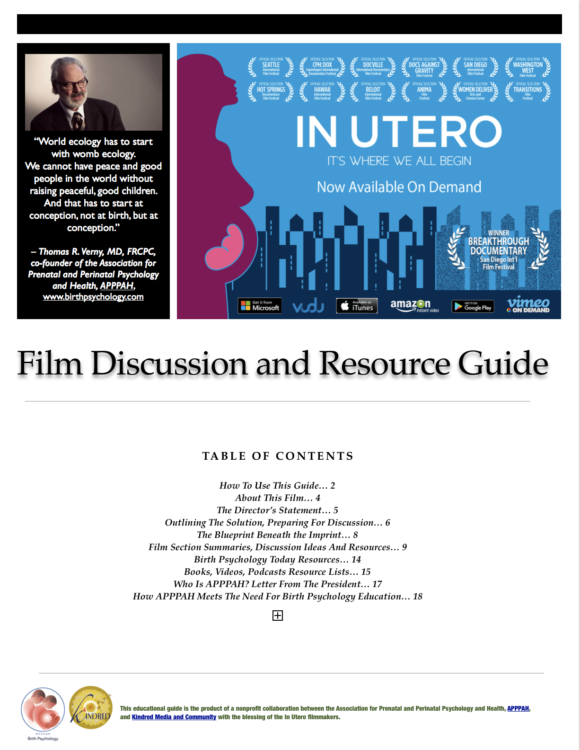 Kindred is proud to announce a collaboration with In Utero filmmakers, Kathleen and Stephen Gyllenhaal, and the Association for Prenatal and Perinatal Psychology and Health, APPPAH, to create a powerful and practical In Utero Film Discussion and Resource Guide.

After a wildly successful year of international film festivals, awards and translation into ten languages, In Utero was released for on demand viewing in October 2016. Audiences quickly arranged home, university and clinic screenings, eager to discover and discuss the film’s cinematic and epic journey through the revelation that “womb ecology becomes world ecology.”

Through well-organized subsections, with titles like Breeding Hostility and Beyond the Blueprint, the film tackles the complex science of epigenetics, transgenerational trauma, and the human psyche’s attempts to resolve birth trauma through mythology, especially fairy tales and pop culture movies like Alice in Wonderland and The Matrix. A dozen international experts – including Gabor Maté, MD, Rachel Yehuda, PhD, and Thomas Verny, MD — weave a coherent tapestry of diverse scientific insights amid scenes of a fetus jolting at the sound of parents arguing, caged monkeys deprived of mothering attacking each other and aerial shots of industrial agriculture and other modern ecological hell holes.

Below you will find the discussion questions from the film guide for this particular section of the film entitled, The Imprint.

Click on the full guide, with resources and complete discussion questions, here.

Read the press release about the guide’s creation here.

Watch the film on demand here.

Bail says, “Everybody has an imprint.  The imprint happens because of the long history of traumas in the world.” It is also significant to see that women often bear the burden of trauma in our culture, and this is passed down to the children.

“Human beings are affected by their environment as soon as they have an environment, and that means as soon as they are implanted in the womb… People are conceiving, carrying and birthing children under increasingly stressful conditions.  Stress that affected one generation will be played out in the next generation.  When we see dysfunction in people, we’re actually seeing the imprint.”  Gabor Maté, MD, quoted in film

In this section, Mate tells us about imprinting, and we hear that everyone has an imprint.  What do you think of this notion, that we are all stamped with experiences? We hear a lot about attachment and attunement, what does that mean to you?

Reflect on your own life.  If you are a parent, how would you say stress affects your parenting?

Can you outline the ways our culture supports an increasingly stressful life for human beings, especially the burden on women?

What are some ways we can increase feelings of security, especially with our children?

Ray Castellino, prenatal and perinatal somatic expert, talks about creating harmonic resonance in our families.  What do think that means, and how do you think we can support this feeling in human beings?  What do you think this would do for the prenatal environment?

Watch Castellino talk about the Blueprint Beneath the Imprint in this Kindred exclusive video interview.

“That Forever Empty” Feeling: What Is It? How Do We Anesthetize Ourselves? Or Wake Up?

Beyond Trauma – A Video Presentation

Digital Dictators, Colonization of Our Bodies, and the Power of the…