Changing The Human Psyche For Living Sustainably: On Thomas Berry

Listen to Darcia Narvaez, PhD, share her insights into Creating Sustainable Humans With Conscious Parenting in this this Kindred interview:

Thomas Berry was a cultural historian who sounded an urgent alarm at the state of humanity and the planet. He inspired readers of his many books to reclaim humanity’s role as the consciousness of the universe and to restore a true partnership with the Earth Community. 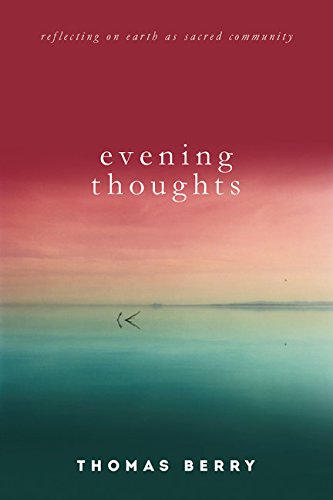 In Evening Thoughts, he put his message succinctly.

The human destruction of the planet is directly a result of the loss of a “capacity for human presence to and reciprocity with the nonhuman world.” (18)

“The thousandfold voices of the natural world became inaudible to many humans. The mountains, rivers, wind, and sea all became mute insofar as humans were concerned.” (18)

Instead, humans need to perceive the universe as a communion of subjects, not a collection of objects. As individuals recover this understanding, “a new interior experiences awakens within the human…the barriers disappear…an enlargement of soul takes place…the excitement evoked by natural phenomena is renewed.” (18)

“Dawn and sunset are once again transforming experiences, as are the sights, sounds, scents, tastes, and feel of the natural world about us—the surging sea, the sound of the wind, the brooding forest.” (18)

Humans have also lost the understanding that the Earth is a onetime endowment, coming into being as unique bundle of energy and self-shaping processes and systems.

To turn things around for humanity and Earth, “a largeness of vision and a supreme dedication are needed.” (19)

The third loss is an understanding that the Earth is primary and humans are derivative. Humans are dependent on the “integral functioning of the planet,” an obvious fact that is consistently denied. That this fact is extensively ignored and violated is beyond belief. (19)

Humans can easily bring about death but they are incapable of bringing about life without relying on the processes inherent in the Earth itself.

Here are the beliefs, all transcendent (outside of earth-focused living) and recently evolved in human presence on the earth. These have led humans to their earth-destructive habits in the last centuries:

The view of God as outside of nature has led to a desacralizing of one’s experience on the earth, a loss of the sense of divine in natural phenomena.

3. Belief in redemption for a place beyond the natural world.

Earth can be trashed because humans are headed elsewhere.

4. Split of mind from matter (Descartes and others)

Matter is of less importance than mind. Only humans have mind, everything is a dead object.

Berry discusses how we are entranced with the possibility of a WonderWorld through the development and use of human technologies. Yet what we are really creating with technological advancement, if you are paying attention, is a WasteWorld.

What is needed is a re-evaluation of the industrialized, technological world.

Because of its destructiveness to planetary systems, the industrial world is a one-time event. And, unless things are turned around, it will lead to planetary and human self-destruction.

Berry argues that our Great Work is to construct and take up an alternate vision.

For an explanation of how the human psyche is constructed to accept human separation from and superiority to the rest of nature, and how to return to human potential, see Neurobiology and the Development of Human Morality; Evolution Culture and Wisdom.

Watching With Wonder – Carly At Two