The Nurture Balance Sheet: How Much Is “Undercare” Costing Us? Part One

This is a two part series.  This is Part One: Investing In The Evolved Developmental Niche.  Part Two: Why Fathers Provide The Solution can be found here.

In modern Western society, many parents are wrangled into ignoring or denying, to some degree, babies’ natural needs for a high level of attention, bonding, and physical contact. We’re offered other ways to frame it: raising an “independent spirit” or toughening our babies in preparation for the “real world.” But in order to make duel-parent full-time employment in the first year work, other costs are accrued.

Regardless of what side of the “mommy wars” we think we’re on, looking at the issue through a biological and then economic lens can clarify the battleground: uniting us under one cause.

The Evolution of Babies

“She screamed like it was killing her,” as one mom client recounted (after trying to sleep train her baby according to the standard protocol of leaving her suddenly to cry alone at bedtime.) That’s because babies fear that it could, according to biological anthropology. (This is a scientific discipline currently ignored by the baby sleep trainers who are younger than it is.) Of course babies don’t understand the concept of actual death, but they do come programmed for nearly continuous physical contact because that’s precisely what ensured their survival for millions of years–babies equate isolation with danger. So when suddenly left alone, a young baby especially, can quickly spin into full panic mode—their instinct to survive is triggered.

And even that can be okay. If that’s when we parents step in. When we offer the greatest gift to the survival-minded baby, soothing, the repeated process culminates into better mental development and better physical health (for soothing tips). When that baby’s panic is not calmed, however, as is prescribed in many sleep training methods, it sets into motion a developmental trajectory that’s quite the opposite of raising an independent, tough child. It sets the baby’s nervous system on high-alert (thus, our current anxiety epidemic). This high-stress state, when left alone, also contributes to a host of physical compromises, from immune to endocrine (hormones). Developmental neuroscience is beginning join biological anthropology to shine a light on the importance of listening to our babies.

In fact, from an evolutionary neuropsychological perspective, babies seem to come programed with the need to feel not only safe, but valued. Feeling valued, which is also communicated each time we respond to our babies’ cries, boosts a host of mental health outcomes in the same way the cry-it-out practice increases risks for future anxiety. These innate safety and value needs point to the necessity of specific parenting practices in early life. Enter Darcia Narvaez, Ph.D, professor of psychology at Notre Dame. Her work has shown how getting these instinctual needs met well translates into a foundation for life-long well-being and better mental health. Narvaez has synthesized the latest research to pinpoint exactly what these baby-expected parenting practices are and their corresponding effects on early childhood development.

Narvaez’s research indicates that the closer we get to the following these standards, the better, in terms of care that aligns with the natural, biological needs of our babies. She’s also coined a term to describe care that falls short of these evolutionary norms: “Undercare.” This serves to emphasize that we’re not referring to abuse and neglect, but something further down the spectrum that falls short of meeting the instinctual expectations of babies. Those standards of care are: a soothing birth, avoiding stress and pain as much as possible; consistent and positive responsiveness to babies cues/communication; multiple care-givers who are bonded to baby; breastfeeding (on demand and extended); lots of physical contact and affectionate touch; and creative free-play in nature with multiple-aged peers. Narveaz calls this paradigm the Evolved Developmental Niche (EDN) and it’s supported by concrete outcomes like, higher intelligence, better development of empathy, social aptitude, and attachment (itself protective against metal illness).

The Financial & Economic Case for High-Nurturing

Though numerous studies from across disciplines support the benefits of these ancient parenting practices, they don’t tend to mesh well with our modern cultural ideal of the “good baby”: one who dutifully plays with a light-up toy in her isolated playpen, quietly accepts a bottle every 3 hours from day one, and endures being dropped off with a rotating staff of strangers without a fuss. Of course quality daycare transitioned to gradually with respect to the individual baby’s comfort can make all the difference. But the reality is, many parents have to get back to work on a timeline that doesn’t allow for “gentle” or “comfortable” anything, let alone care anywhere close to the EDN. This makes aspects of modern parenting at odds with the natural needs of babies and this is where the future costs begin to accrue—not just in terms of the human condition, but also financially and economically.

Case in point: short maternity and paternity leaves typically put adequate touch, responsiveness, and breastfeeding on the chopping block. Without a strong multiple-caregiver practice that includes night-care, a 12-week maternity leave—the federal requirement—can be punishing, for both parent and baby. At 12 weeks, maternal exhaustion is often at its peak, as the baby emerges from his fussiest period (2 to 12 weeks). Bonding has just begun for many of those parents with babies on the fussier side (let’s face it, it’s difficult to bond with a scream machine). The exhilaration of having a new baby has given way to an accumulated sleep deficient previously unmatched. Meanwhile, a 12 week-old baby’s social and emotional brain has just blasted off on its fastest growth-spurt ever, featuring structures and systems that form in direct response to human interaction with attachment figures. Critical periods for development that will never occur again are looming large. And at this most vulnerable and crucial time, the baby is to be handed off to institutionalized care during the day and left to cry-it-out alone at night?

In light of healthy psychological development, Narvaez’s EDN begins to look less like a parenting manifesto and more like a societal mandate. In Part Two of this post, I’ll run the numbers to reveal why EDN-parenting pays dividends at the individual, corporate, and societal levels.

What if this investment in very early child development improved the productivity of nations, saved billions on healthcare costs, and even better equalized the gender gap in the workplace? Here’s why it can. So, mommies unite (and daddies, too)! When we fight for a society that supports a high-nurturing babyhood, we all win. 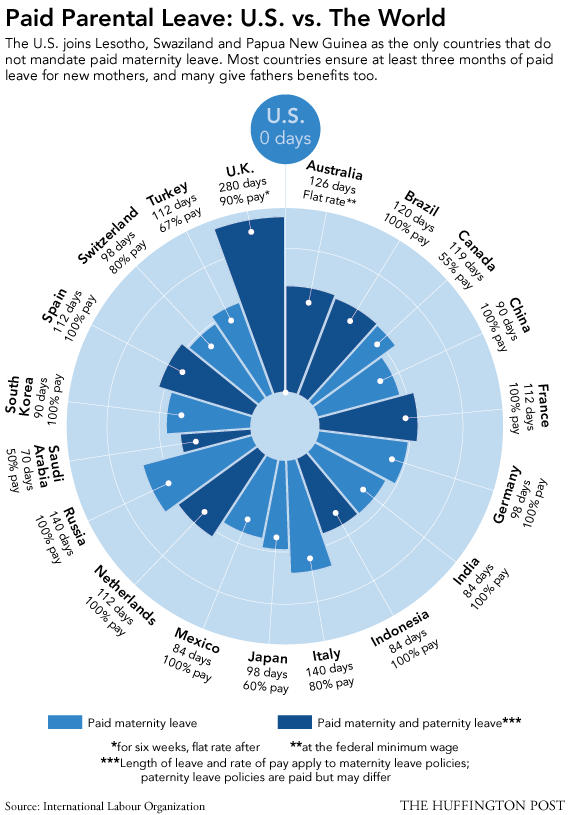 PL+US, Paid Family Leave for everyone in the US.

National Partnership for Women and Families

More on Maternity Leave from MomsRising: 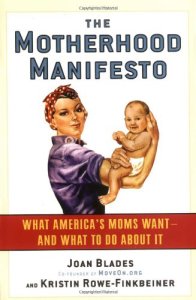 What You Can Do

Visit Angela at ScienceMommy.com and The Evolved Parenting Initiative.  From penning tight write-ups for the clever readers of DailyCandy.com to serving as Beauty Editor for Lucire (New Zealand's Vanity Fair equivalent) or delivering chunky services pieces for magazines like Harper's Bazaar and Pregnancy  and Newborn, my work has been diverse, but always, it has mingled with culture and  science. Now that I'm focused on parenting, understanding the (often divergent) forces of science and culture is even more of a passion.

I strive for journalistic excellence by first conducting deep analysis of scientific studies and then considering the entire body of work on the subject. This allows me to add an accurate, holistic, and meaningful  take on the collective conversation surrounding an issue, or to add fresh, useful advice to a service piece. I believe readers deserve better than science reporting that simply regurgitates the researchers' conclusions or worse, puts a sensationalized spin on them. Here is a sampling of published print articles across a decade of freelance journalism. Specific story ideas are available upon request.