Last month, the American Academy of Pediatrics (AAP) published research showing newborn babies suffer pain from common medical procedures, and that the effects of the pain can last many years. Today, Georganne Chapin, executive director of Intact America, said the organization has launched a widespread petition drive to tell the AAP to take the next logical step: advise doctors to stop the painful and medically unnecessary circumcision of baby boys. 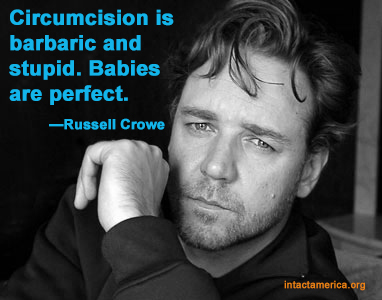 “The AAP says babies shouldn’t be subjected to unnecessary pain, and that commonly used pain relievers are neither effective nor safe,” said Ms. Chapin. “Therefore, we are baffled that they continue to promote ‘routine’ infant circumcision. If the AAP says minor procedures such as heel sticks and insertion of IV needles harm babies and the number of such procedures should be reduced, there is no justification to perform invasive, medically unnecessary surgery that removes a natural and valuable part of a boy’s sexual anatomy—the foreskin.”

The article, “Prevention and Management of Procedural Pain in the Neonate: An Update,” was published by the AAP Committee on Fetus and Newborn and Section on Anesthesiology and Pain Medicine in the February 2016 issue of Pediatrics.

Intact America posted its petition today on change.org and on intactamerica.org. The petition is designed to demonstrate public support of Intact America’s request that infant circumcision stop. Ms. Chapin will be mobilizing Intact America’s army of followers to obtain the goal 29,000 signatures by February 29—approximately two weeks from now. As the largest national advocate against circumcision, Intact America has hundreds of thousands of visitors to its Web site and Facebook page each month.

No Benefits, But Real Risk

The petition’s language makes an unequivocal case for the AAP to end its claim – disputed in the international health community – that the benefits of circumcision outweigh the risks. Ms. Chapin pointed out that the AAP report confirms that pain is a serious risk to babies in addition to the surgical complications that occur in at least two out of every 100 infant circumcisions performed.

“Now, we have a systematic AAP study about the short and long-term risks of pain inflicted upon infants,” Ms. Chapin said. “This is all we need to know in order for the AAP to stand up and say to its members: ‘Removing a boy’s foreskin is not medically necessary, it is painful, and the pain may compromise his neurological development for years hence. The AAP recommends that the circumcision of male infants cease.’ ” 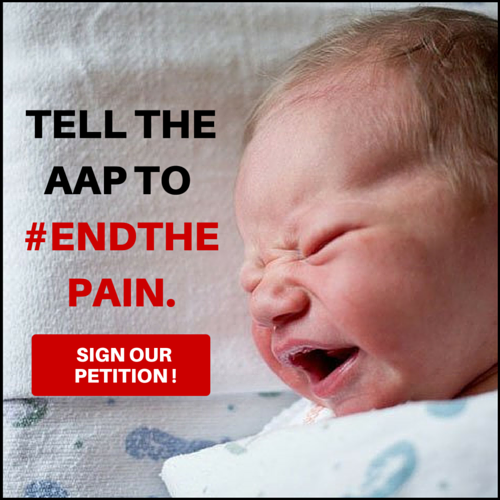 What the Petition Says

The petition is addressed to the AAP Executive Committee and the AAP Circumcision Task Force, and can be found online at change.org and at IntactAmerica.org under “Take Action” orhere. The petition reads:

‘Tell the American Academy of Pediatrics to Stop Hurting Babies’

The American Academy of Pediatrics (AAP) says babies shouldn’t be subjected to unnecessary pain. But the AAP continues to promote “routine” infant circumcision, a painful, medically unnecessary surgery that removes a normal part of a baby’s penis.

Last month, the AAP published research showing that common medical procedures carried out on newborn babies are very painful, and that the effects of the pain can last many years. The procedures mentioned included heel sticks, insertion of IV needles, and circumcision. The AAP report also found that commonly used pain relievers are neither effective nor safe.

Infant circumcision differs from the other procedures discussed in the report in that it is an invasive surgery that neither tests for nor treats any illness, and permanently removes a natural and valuable part of a boy’s sexual anatomy – the foreskin. The pain from circumcision is intense and continues for days or weeks after the surgery.

Some of the falsehoods currently used to support circumcision include hygiene, disease prevention, and aesthetics.

Many Americans also believe that circumcision is “just a snip” — a minor, brief, and painless procedure that babies will not remember. This is FALSE, and the new AAP article on pain proves it.

Because circumcision is NOT medically necessary, and because the pain it causes is unmanageable and harmful over the long term, Intact America demands that the American Academy of Pediatrics tell its doctors to end the pain and stop circumcising baby boys.

About Intact America:
Intact America is the leading organization dedicated to ending infant and child circumcision. With its membership of over 60,000 intactivists, Intact America works toward creating a world in which all people of all ages are protected from circumcision or any other permanent genital alteration inflicted on them without their informed consent. Its mission is to educate parents, doctors, nurses, and the American public that the foreskin is a normal, natural part of the human body, designed by nature to provide protection and pleasure. Intact America is based in Tarrytown, N.Y. Visit Intact America at www.intactamerica.org, on Facebook, and on Twitter.

Intact America. Intact America works to protect babies and children from circumcision and all other forms of medically unnecessary genital alteration, whether carried out for cultural conformity or profit, in medical or non-medical settings. We seek to achieve our goals through education, advocacy, public policy reform, and the empowerment of our supporters, partners, and volunteers. You can read our Statement of Principles here.

National Organization to Halt the Abuse and Routine Mutilation of Males, NOHARMM,
Activist Organization for Men

Nurses for the Rights of the Child, NRC, Conscientious Objector Information for Nurses

Attorneys for the Rights of the Child, ARC

Regret: Facing, Feeling And Healing The Heartache Of Lost Possibilities

New Study On Discipline: Long Term Relationship-Building, Not Verbal-Reasoning Or…