The Raising of America documentary is available for free streaming online through February 15, 2016. The five-part series explores how a strong start for all our kids can lead to a healthier, safer, better educated, and more prosperous and equitable America. The National Partnership for Women & Families has created a toolkit to support the use of the documentary as a paid leave advocacy tool.

Read and Find Resources on Paid Family Leave on Kindred.

About The Raising Of America Project 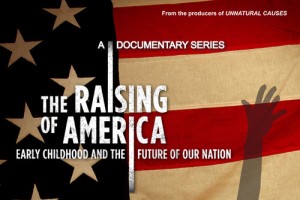 The Raising of America grew directly out of California Newsreel’s four-hour PBS series, UNNATURAL CAUSES: Is Inequality Making Us Sick which explores the root causes of our alarming class and racial inequities in health. The series won Best Science Film/Radio/TV program of 2009 by the National Academies, a duPont–Columbia Award (considered the Pulitzers of broadcast journalism), among other prestigious honors.

Find screenings, host a screening and find other ways to get involved here.

Wounded Places travels to Philadelphia and Oakland where a long history of disinvestment and racial exclusion have ravaged entire neighborhoods and exposed children to multiple adverse childhood experiences (or ACEs). We meet families and some remarkable young people who have been traumatized not just by shootings, but fear, uncertainty and a sense of futurelessness.

As Stanford physician Victor Carrion explains, “If we are crossing the street and we see that a truck is coming at us, we can manage that situation, get scared, jump, and move quickly. Unfortunately, many children in our society feel like a truck is coming at them all day long, for more days than not, and this really takes a toll.”

For instance, in 2012 in Connecticut alone, 2,000 children aged six years and under—overwhelmingly black and Latino—were suspended from kindergarten and preschool, dramatically increasing their risk of eventually dropping out of school and being sent to prison.

Rather than ask, “What’s wrong with you?” they ask, “What happened to you?” and “How can traumatized individuals and neighborhoods heal?” The implications of this simple shift can be transformative—for those suffering from trauma, for neighborhoods and even for the providers themselves.