New Study Says EMFs On Par With DDT Or Lead For Children: 10 Ways To Limit Your Exposure

Editor’s Note: The International Agency for Research on Cancer (IRIC), part of the United Nations’ World Health Organization (WHO), classifies more than 250 agents, including chloroform, lead, gas and DDT as Class 2B Carcinogens, and now radiofrequency electromagnetic fields (RF/EMF).  Sources of RF/EMF include radios, televisions, microwave ovens, cell phones, and Wi-Fi devices. Read more about the report published in the Journal of Microscopy and Ultrastructure entitled “Why children absorb more microwave radiation than adults: The consequences” in this Forbes article here.  Thanks to SafeMinds for the 10 Ways To Limit Your EMF Exposure below!

I know. We’ve already got you smelling your kid’s shoes before you buy them, searching for a couch made without flame retardants, and fretting about themercury in your mouth, and now I’m adding another concern to your list: Your child’s exposure to electromagnetic fields (EMFs). 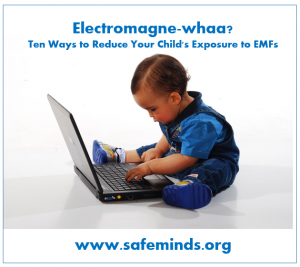 What are these things anyway?

And why should you be concerned about them?

An Electromagnetic field (EMF) is a field produced by any object that is electrically charged.

Electromagnetic fields are present everywhere in our environment. EMF technology is a remarkable breakthrough of great business and social importance. Our society no longer functions without it. Many of our jobs rely on EMF technology. We also stay in touch with the people we love through cell phones, we watch over our babies through wireless baby monitors, and we heat up our dinners in the microwave.

Because EMFs are invisible areas of energy, many of us are not aware of the extent to which they exist. If we could see them, we’d be able to see EMFs stream in through our windows, ceilings, and walls. Some of this radiation can penetrate a few inches into our body; some of it passes right through our skin, muscle, and bone.

We know, as the World Health Organization points out, the earth has its own magnetic field—used by birds and fish for navigation—and there are other instances of naturally occurring EMFs, when electricity builds up during a thunderstorm, for example.

But in recent decades, with the increasing popularity of cell phones and personal computers, we’re living in a soup of manmade EMFs.

Why should we care?

The neurons in the human brain are continuously converting chemical signals to electrical signals and back again. That’s how our brain cells communicate.

It stands to reason that things that interfere with electrical signaling may have the potential to alter our brains.

“It makes biological sense that we should be concerned about this,” my friend and colleague Sallie Bernard explains. “Some people are reporting feel healthier and less dyregulated after reducing their exposures to EMFs.”

Some studies have shown a possible link between electromagnetic field strength and an increased risk for childhood leukemia.

And we now know it is not necessary for the strength of an EMF to be high for a biological happening to occur – there is considerable evidence that even extremely weak signals can have physiological consequences.

Finally, it’s children with developing organs who are most sensitive to possible effects of exposure to electromagnetic fields.

Are Electromagnetic Fields Implicated in Autism?

A recent peer-reviewed scientific series by Cindy Sage, who works for Sage Associates, an EMF Consulting Firm, and Dr. Martha Herbert, Ph.D., M.D., a pediatric neurologist and brain development researcher at Harvard University, looked at the existing science in order to evaluate potentials for a cause-and-effect relationship between electromagnetic fields and radio frequency radiation (RFR) and autism symptoms.

These researchers found that behaviors in autism spectrum disorders may emerge from alterations of normal brain function, and that EMF/RFR have the potential to contribute to these alterations by creating an inability to achieve a normal balance in brain activity or to properly send and receive the electrical signals associated with normal brain function.

Further, the research team discovered that EMF/RFR exposure could lead to biological system overload and failure.

In other words, continuous exposure to electromagnetic fields might either overwhelm or eventually lead to an inability to tolerate the levels normally found, resulting in increasing risk, and worsening biological problems and symptoms.

Peter Sullivan, a father of two boys with autism who left Silicon Valley to start Clear Light Ventures, a public education organization to improve the quality of life for children with autism, explains that exposure to EMFs is another form of pollution. It isn’t natural, our bodies are not normally subjected to it in the amounts we are getting now, and it is causing negative health outcomes in people who are sensitive or overexposed.

Sage and Herbert believe that reducing exposure to EMF/RFRs might help remove barriers to proper function and healing in people with autism spectrum disorders.

According to the Occupational Safety and Health Administration, “Research continues on the possible biological effects of exposure…”

So … while we wait on that research to continue, we can take simple steps to limit our exposure to EMFs.

Here’s my best advice, compiled with the help of my colleagues Sallie Bernard and Eric Uram.

10 Ways to Keep a Safe Distance and Reduce Your Exposure to EMFs:

This blog is adapted from an article I wrote with Sallie Bernard and Eric Uram for this month’s Autism File. For more details about this reducing EMF exposure, read the full article here.

Jackie Lombardo is a SafeMinds board member and a mother of three with a keen interest in children’s environmental health. As a member of the Sierra Club National Toxics Committee, she has been involved in national projects stressing education, precaution and strong legislation for mercury, bisphenol A, pesticides, and lead in children’s products. With a strong belief that children’s health can be improved through public policy promoting a cleaner and safer environment, she remains confident proper legislation will reverse the tragic decline in children’s health.

When Children’s Trauma Leads To Terrorism

We Can Heal The Shock We Carry: 10 Steps To Resolving Shock

The Girl Child Walk: Understanding Our History Of Patriarchy, A Short Film