Editor’s Note: This week there was, yet again, another school shooting, the 74th since Sandy Hook Elementary School.  (You can see a full, historical listing of all school shootings in America on Wikipedia and on the Every Town for Gun Safety site.) While a former generation of parents bought reflectors for their kids’ bikes to protect them from cars, one online article highlighted a new bulletproof blanket parents can buy, for $1,000,  and tuck into their children’s lockers for protection from the “tragic reality” (the articles says) of 21st century school shootings.  Sales of the bulletproof blanket “exceeded the manufacturers expectations,” according to the Huffington Post.

Kindred readers, who are thoughtfully exploring the disintegration of the Old Story, the emergence of a New Story and the space we, as Cultural Creatives, now occupy between these stories, trust our belief that the human reach for wholeness as individuals and in community is always happening, even if we can’t find that story shouted from the 24 hour droning of CNN and mainstream media (which is why Kindred and its nonprofit, alternative media mission exists!) .

Sometimes, many times in fact, to hear the truth of a story so counter to cultural messages around us, we need to do as Kevin Sabourin did, in his story below, and travel to a still, cloistered place where people carry out their commitment to healing the human family without much fanfare at all.  The little known place Kevin shares with us, Ferncliff, has quietly welcomed families and communities devastated by school shootings for 14 years.  The evidence of these communal retreats can be found on the stones gently placed alongside others in the shadow of a small stone chapel to form an ancient tool for healing – a labyrinth.  Some of the stones are brought from the towns where the shootings took place. The photo at the top of this page is a rock in the labyrinth brought to Ferncliff from the town of “Columbine.”

The Story of Ferncliff Labrnth 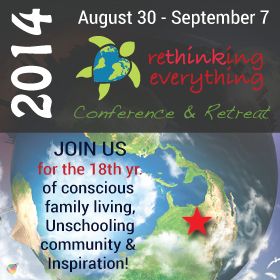 Last October, I did a site visit to the C. A. Vines 4H Center (the current home of the Rethinking Everything Conference and Retreat) and had the good fortune of meeting their neighbor, Mr. David Gill – the Director of Ferncliff.

Like most of us you’ve probably never heard of Ferncliff, and that’s probably just fine with them, but wait until you hear what they’ve been up to… Not only are they an emergency relief center and an eco-construction showplace, but an operating organic farm and a sustainability leader. Sure they compost, teach Solar Schools, and educate people on the latest in water filtration methods, but they also built a labyrinth…!

What’s important about a Labyrinth, you ask? Well, let us share the story below and you can decide:

A school shooting on March, 24th, 1998, at Westside Middle School, outside Jonesboro, Arkansas, rocked the world! Four students and a teacher were killed. Ten others were wounded. The shooters were 11 and 13 years old. 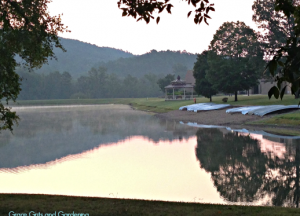 Shocked like the rest of the country, Ferncliff reached out to help. They contacted the school and offered students a free week-long healing retreat to help survivors recover from the trauma. The camp would incorporate a number or exercises, down time, nature and connection with others.

There were about 200 children on the playground that day. Sixty eight of them attended the first camp in July of 1998 and more than 100 came to one or more of the retreats. It was very successful and people felt like it helped the healing. Although there was never any thought given to hosting more than the first camp, parents and students implored Ferncliff to continue. Thus began a series of eight camp events, or healing retreats, over a 5-year period, until the first class of students graduated.

After the shooting at Columbine, in April of 1999, the Jonesboro students asked Ferncliff if they could reach out. So, in February of 2000, Ferncliff helped organize a “Summit of School” where 15 Westside students (who had all attended the Ferncliff camps) were flown to Littleton, Colorado to join Columbine and Conyers, Georgia students in spending a long weekend together. The outreach continued and the community, and Ferncliff, helped one another to heal. 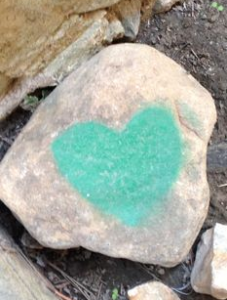 Following the Summit of School’s success, during the summer of 2000, a special camp at Ferncliff was opened to students from Columbine and Paducah, Kentucky. Then, the next summer, students from Bosnia (Muslim and Christian) were invited in as well as other students from St. Louis, Los Angeles, and other sites episodic of prolonged violence. The facility was become known for outreach to youths, specifically students, impacted by the affects of these horrific events.

While at the camp, students would engage in a number of community and individual healing exercises. One such healing sessions involved letting the students walk around a borrowed, portable, labyrinth. The experience was so meaningful, Ferncliff decided to raise funds so that a permanent Labyrinth could be built at the camp.

A plot was selected, back in the woods, on the lawn in front of an old historic chapel. A labyrinth consultant was then brought in for planning and construction. Plans took shape and in the summer of 2001 a 52’ diameter Chartes labyrinth was built by the students attending the next camp at Ferncliff. A rock was brought from the Westside School. Another was brought from Columbine. A few others came from other sites and were set in the middle as the labyrinth was completed, dedicated and walked.

This place was built by and for the healing of the students, and remains for the healing of any and all. The Ferncliff labyrinth will always be special; It is special because of who built it, how it came to be and the fact that has become a powerful place of communal healing for all to benefit and enjoy.

Kevin notes: By the way, when RE asked David Gill for more info detailing this special place it wasn’t readily available. It actually had to be created. A wonderful story of caring people quietly helping!

Thank you Ferncliff for caring, showing leadership and making a difference!

Tips for a Natural Pregnancy by Lauren Feder, MD

Our “Science-Fictiony” Worldview Lens: Do We Ever Know What Is Happening?…