IN DEFENSE OF BOREDOM: It Can Lead to Imaginative Play, Creativity and the Great Outdoors

Adapted from “Last Child in the Woods.”

Especially during summer, parents hear the moaning complaint: “I’mborrrred.” Boredom is fear’s dull cousin. Passive, full of excuses, it can keep children from nature — or drive them to it. 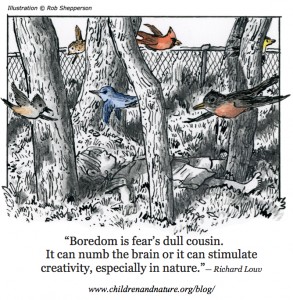 In summers past (at least through the fog of memory), children were more likely to be pulled or forced out of their boredom. In the late, hot afternoon, the Mickey Mouse Club might have been enough to pull you in from outside, but most of the day’s TV offered nothing except soaps and quiz games and an occasional cowboy movie — which made you want to leap up and head outside.

“Well, times have changed,” said Tina Kafka, a teacher and mother of three, when I interviewed her forLast Child in the Woods. “Don’t wax too nostalgic,” she advised. “Even if kids have all the unstructured time in the world, they’re probably not outside playing. They’re inside with their video games.”

She recognized how, in her own memories of childhood,  carefully-planned activities pale in comparison to more spontaneous experiences.  Like many parents, she wanted to make sure her own kids have such memories. But how? Here are a few suggestions.

• Recognize that boredom isn’t necessarily a negative. There’s a big difference between a negatively numbed brain and a constructively bored mind. Constructive boredom stimulates creativity. Constructively bored kids eventually turn to a book, or build a fort, or pull out the paints (or the computer art program) and create, or come home sweaty from a game of neighborhood basketball.

• If possible, limit electronics. Geocaching and digital cameras used for outdoor photography can be great. Tech isn’t the enemy, but it can certainly be a barrier. Reduce access to computers, texting and TV part of the day — or have tech-free days — and children’s creative boredom can produce results. They may play slowly at first, then imaginatively, freely.

• Find a balance between adult direction and child boredom. Too much boredom can lead to trouble; too much supervision can kill constructive boredom – and the creativity that comes with it. “I structure some unstructured time for their kids, times when they can just draw or paint or read and dream, or especially to go outside, with no deadlines or commutes to lessons,” said Kafka. “I realize that sounds paradoxical – structuring unstructured time, but you’ve got to do it.”

Sympathetic employers can help. Kafka has the summers off since she works as a teacher. Other parents work at home, either with home businesses or in the traditional stay-at-home role. Today, most parents don’t have that kind of flexibility, but they need more (flexible summer workplace hours, for instance) if they’re going to guide their kids to use boredom wisely.

Parents can also help push for additional funding for community-based summer recreation programs. Summer camps — whether outside of the city or in inner-city parks — are godsends to many working parents, especially single parents. “Adventure playgrounds” provide kids with a supervised (by an adult, at a distance) vacant lot filled with old tires, boards, tools – and places to build and dig.

Shaping Your Inspired Success, One Day At A Time

Ecocentrism: What May Be Needed to Save Our Species