Download this interview with Shannon Hayes and Lisa Reagan, Kindred’s editor.  Recorded for the celebration of Earth Day 2013, Hayes shares her research and interviews with families who are making the switch to sustainable, holistic lifestyles that are consistent with their values. In this interview Hayes shares:
1- The seven skills of a radical homemaker
2- How to create a values and dreams board with your partner so you can support each other on decision making
3- How becoming sustainable does not mean going to live in log cabins and eating bark
4- How Radical Homemakers, aka Cultural Creatives, are changing the world just by being themselves and living fearlessly.
5- The practical details of living sustainably, including living without health insurance 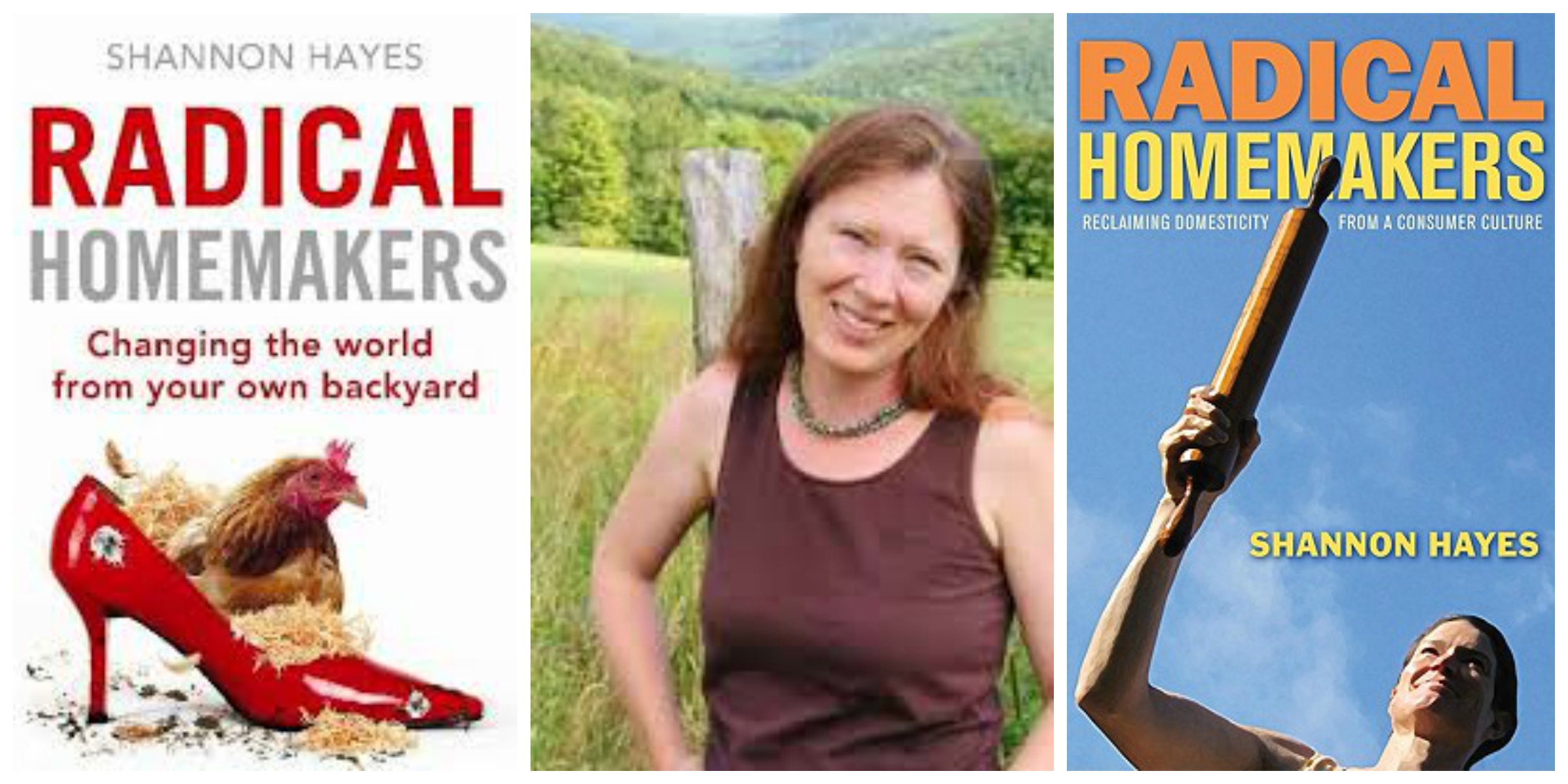 I turned 40 this past week. Bob knows better than to abrade my spirit with the social stress of a birthday party. My perfect jubilee is one spent cloistered away from the world, allowed to celebrate with the forest, my family, my dogs, and my thoughts.

Part of turning 40 is about being fearless enough to face my deepest, most secret dreams and to bring them out into the world.

Turning 40 has absorbed a lot of my attention in recent months. I have a history of being rather maudlin at birthdays, rueing the passage of my life (a pattern that began when I turned 10). I decided last summer that if I didn’t want to hit a landmark year and spend the day wallowing in sorrow, then I needed to make a gift to myself.

I had to choose something that would buoy my spirits, engage my mind, fuel my creative fire. It needed to frighten me with a challenge that, earlier on my path, might have seemed insurmountable.

It needed to be something I had secretly wanted my whole life.

Thus, to celebrate turning 40, I chose to take the whole winter off to write my first novel.

But a mother of two on a family farm doesn’t do such a thing. Instead, I take an hour or two each day. Then I referee over bicker matches, arrange schedules, help with breakfast preparations, walk the dogs, teach my children, fix lunch. And in this particular year, confronted with labor- and age-induced injuries on our family farm, as the strongest adult (for the moment), I find myself spending more time splitting wood, throwing hay, chipping ice out of frozen buckets, and carrying meat boxes.

On the morning of my birthday, Dad had an appointment at the hospital and I knew I needed to be at the farm before I could even have a celebratory cup of coffee with Bob and the girls. But I woke in the predawn hours, long before the cattle stirred and the sheep began their morning chorus. And I gave myself the gift of sitting down to work at my novel.

Then I drove to the farm and greeted the cows, chickens, and sheep. I laid down fresh bedding for the hens, poured water slowly from a bucket so the red Devon steer could stick his tongue in the falling stream (he really enjoys that), stopped and gazed at the sun streaming through the cracks in the barn as it lighted the floating hay chaff, spotlighting its dance in the winter air. I puttered about the barnyard until my parents came home from the hospital. Seeing Dad smile with temporary relief from his pain, I took my leave and headed home.

I removed my barn boots and coveralls, pulled off my hat and gloves, then found my way to my little rocking chair that sits in a sunlit corner of the house. And there, the girls flocked around me, little chicks, their bodies in a confused tizzy with an eagerness to nuzzle under their mother hen, but equally eager to chirp, dance, and make a celebration. My lap was soon piled with colored drawings, handmade birthday cards, and baked clay jewelry and coiled pots.

Bob sat quietly in the chair opposite, his kind brown eyes taking in the entire scene. Then he brought out a box and set it on my lap. In it was a sculpture of an Iroquois woman, a burden strap around her head, a bundle of sticks on her back. And beside it, a poem he had written:

The sleet whispers to the husks of beech leaves
as she passes before the unblinking eyesof somnolent aspens
who have relented their bones to her use,
kept dry above the coveting snow.

Each footfall chosen and deliberate,
she leans from her load
dwelling where its weight, dragging backward
is poised against her own, drawing ahead
on the path she has cleaved with her wanderings.

Her heart sings its song with quiet certainty,
her brow bears its burden, resolute and knowing
that the sentient thicket and woodland always intended
that she carry home the blaze of their autumn fires
to be reawakened as the light and warmth of her hearth.

I looked up at him, my eyes growing watery. “To celebrate your burdens,” he whispered, then brushed my lips with his own.

And, with his help, I see the significance of turning 40. One part is about being grown-up enough, confident enough, fearless enough to face my deepest, most secret dreams and to bring them out into the world.

And the other part is to embrace all those forces that seemingly work against those dreams, those burdens I have chosen by the act of living and surrendering myself to those that I love.

Celebrate the dreams. Celebrate the burdens, too. For it is in that delicious tension point—where dreams pull forward against the backward draw of one’s burdens, where life becomes a beautiful work of art.

Shannon Hayes works with her family raising grassfed livestock on Sap Bush Hollow Farm in West Fulton, NY.  She holds a bachelors in Creative Writing from SUNY Binghamton, and a Masters and Ph.D. in Sustainable Agriculture and Community Development from Cornell University.  In addition to homeschooling her children with her husband, Bob Hooper, Hayes hostsgrassfedcooking.com and is the author of The Farmer and the Grill and The Grassfed Gourmet.  To contact her, write toshannon@radicalhomemakers.com.

Mindful and Just Parenting: Cultivating the Courage of Radical Compassion

“Decolonization” and “Indigenization” A Brief Argument for…

Attenborough’s Film Is A Must Watch, But…

“Decolonization” and “Indigenization” A Brief…

The Original Sin Of Babies

Why We Forgot How To Feel, A Video With Gabor Maté, MD