Cut, Stapled & Mended: When One Woman Reclaimed Her Body and Gave Birth on Her Own Terms After Cesarean

April is Cesarean Awareness Month.  This is one woman’s story and may not reflect your experience.

I’m supposed to say I’ve recovered and that the cesarean didn’t matter.  But that’s just not true. Twelve years have passed and though the tears, like my scar, have faded, I lost part of myself on that operating table. 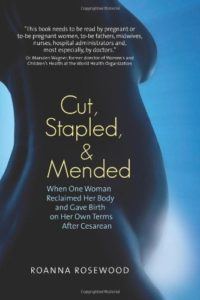 I told people that it didn’t matter. I smiled at visitors and said “at least the baby and I are fine.” I even ordered a big dessert tray for the hospital staff for delivering my baby, for changing his diaper and bathing him, for doing all of the things that a mother is supposed to do but I could not. But at night, when the house was quiet, and my son’s soft lips released their seal on my breast, the tears would come. Flashes of being tied down and cut open haunted my dreams. No matter how hard I tried, I couldn’t snap out of it.Desperate, I sought help from an array of alternative healers. I tried acupuncture, chiropractic work, rapid eye movement, herbalists, traditional therapy and hypnotherapy, homeopathy, and cranial sacral. I even visited a psychic. But eventually I realized that expecting others to fix me was no different than letting others take my baby from my body. As only a mother can deliver her own baby, (doctors are limited to catching, cutting or pulling them out) only I could reclaim what had been lost on that operating table.

Fear became my enemy. As I started to challenge it, I saw that what I had thought was my comfort zone was really just a gilded cage. Every time I self-consciously sat still when my feet longed to dance, or kept silent when I had something meaningful to say, I perpetrated what the cesarean had done to me.

I started to see that the cesarean wasn’t a random event. True, doctors could have prevented it by supporting me through labor and birth. But wasn’t the outcome of medical care alone. It was also a reflection of who I was: someone who sought comfort over glory and security over challenges, someone whom I didn’t like very much.

As painful as this awakening was, it offered hope. Because I was responsible for who I had become, I had the power to change who I would be. Every time the little voice in my head said to sit still and be quiet. I did the opposite. I risked making myself look foolish. I spoke my truth. I danced (gasp) in public! This conquering of self was so rewarding that, before I knew it, I was riding a mechanical bull, parasailing off mountaintops, walking on hot coals, and traveling to remote corners of the world.

No longer a victim, I relish the sacred ground that only survivors can walk upon. Though I will always mourn the part of me that died on the operating table, I love what was born even more. Yes, I love myself now.

Roanna is an the author of  Cut Stapled and Mended: When One Woman Reclaimed Her Body and Gave Birth on Her Own Terms After Cesarean, an award-winning international speaker, co-founder and host of Birth Plan Radio, and the executive action chair ofHuman Rights in Childbirth and most importantly, a mother. In her not-so-humble opinion, the latter makes her a true birth expert.

“While I’m grateful for the incredible support I’ve received from both doctors and midwives, the vast majority of births, like every other bodily function, are best managed by the body in question. It’s time to put women’s needs, feelings, and intuition back in the center of the birth process. Women are the rock-stars of birth; professionals are the backup singers.”

The Cyber-bully vs. The Cyber-hero: Why Children Need Exposure to the Heroic Face of Cyberspace

Staying Connected When You Don’t Want To Be

We Are All In Shock, An Introduction To A New Book