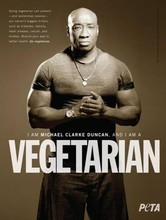 In the movie Forks over Knives, T. Colin Campbell, PhD, and Caldwell Esselsytn, MD, promote the myth that low-fat, plant-based diets confer protection from heart disease. Dr. Esselstyn even flat out guarantees that vegans will never have a heart attack.  Ever.

Sadly, plenty of vegans suffer or have died from heart disease, as well as cancer, diabetes and other serious health problems.  My dear friend Peter Berg  — gifted artist, animal activist and committed vegan — died of a sudden death heart attack at age 42.  Peter believed his kind diet would not only honor the animals he loved so much but grant him good health and longevity.

The death of my friend Peter will surely be dismissed as “anecdotal evidence,” but nearly all the MDs, NDs, CCNs and other health practitioners I know attest to finding plenty of heart disease among vegan patients and clients.

And this week we learned the sad news of the death of Green Mile actor and PETA spokesman Michael Clarke Duncan, whom PETA said was “enjoying the best health of his life” after adopting a diet high in fruits, vegetables, beans, peanuts, and tofu.     Bill Clinton, though certainly thinner since going vegan, is looking poorly and the National Enquirer and similar tabloids all refer to him as “dying,” which, of course, may or may not be true.

We also see cardiovascular problems among meat eaters on the Standard American Diet (SAD) diet,  of course.   I believe Dr Esselstyn may well be telling the truth when he says his patients show better health markers after adopting a vegan diet.  But the likely reason is not that his patients have eliminated animal products from their diets but because they’ve also thrown out their supersized servings of junk foods full of the sugar, starchy carbs and trans-fats that have been well proven to cause heart disease.

What then is the relationship of meat to heart disease?   If meat and other animal products full of saturated fat and cholesterol don’t cause it, then what effect might meat have?   Numerous writers at the Weston A. Price Foundation’s website (www.westonaprice.org) have shown science acquitting meat of all charges that it causes heart disease.    Many of our members have concluded from this that meat either has no effect on heart disease  or that its positive effect comes about from displacing disease-promoting junk foods high in sugar and starchy carbs.

But can meat and animal products actually protect us from heart disease?   A naughty proposition to be sure, given the preponderance of the low-fat, low cholesterol myth.   But the answer is yes, because of meat’s protective effect on homocysteine levels.

Homocysteine first came on the radar in 1969 when Kilmer S. McCully, MD, published the article “Vascular pathology of homocysteinemia: implications for the pathogenesis of arteriosclerosis” in the American Journal of Pathology (56, 111-128).   Over the past four decades,  homocysteine has not only been studied by Dr. McCully — known as “The Father of the Homocysteine Theory of Heart Disease” — but by many other researchers.

Homocysteinemia is an acquired metabolic abnormality, and Dr. McCully initially proposed it could be prevented easily and inexpensively by taking three B vitamins — B6, B12 and folate.   Unfortunately, that solution proved simplistic.   Although the data were clear that B6, B12 and folate were an important part of  any prevention protocol, some people tested with high homocysteine anyway.    The latest research suggests that sulfur deficiency — increasingly common in the modern world and especially common among vegetarians — might be an even more important risk factor.

Last year I reported on a study by Dr. McCully and Yves Ingenbleek MD that ran in the August 26, 2011 issue of the journal Nutrition.   Its title “Vegetarianism produces subclinical malnutrition, hyperhomocysteinemia and atherogenesis” sounded a strong warning about heart disease risk, and the article itself detailed why subjects on mostly vegan diets can develop morbidity and mortality from cardiovascular disease unrelated to vitamin B status and Framingham criteria.

The fact that the subjects developed high homocysteine “unrelated to vitamin B status” is what matters.   Vegans, after all, have long believed they can reduce their homocysteine risk by taking supplemental B12.   B6 and folate levels can be adequate in non-junk food vegan diets that emphasize grains and vegetables though the ability to convert B6 to the active form of pyridoxal-5-phosphate –  found readymade primarily in animal products — may be compromised,   While taking this trio of B vitamins as a heart disease “insurance policy” remains important, theNutrition article suggested high-quality protein — animal protein — rich in the sulfur containing amino acids methionine and cysteine is also needed.   Plant-based proteins will not suffice.

An article published late last year by Dr. Ingenbleek entitled “The Oxidative Stress of Hyperhomocysteinemia Results from Reduced Bioavailability of Sulfur-Containing Reductants” expands upon the issues raised in the Nutrition article.     You can read it in The Open Clinical Chemistry Journal (2011, 4, 34-44) http://www.benthamscience.com/open/tocchemj/articles/V004/34TOCCHEMJ.pdf

It is important to note here that high homocysteine seems to be a major cause of CVD  unrelated to classical Framingham criteria,which are high cholesterol, dyslipidemia, sedentary lifestyle, diabetes and smoking.   In other words, vegans are at risk for heart disease whether or not they achieve goals of low total and LDL cholesterol thought by Dr Esselstyn, T. Colin Campbell, PhD, Neal Barnard MD. and other proponents of veganism to be protective against heart disease.   It is also clear that maintaining  healthy habits such as getting enough exercise and not smoking may not be protective enough.

The Whole Soy Story: The Dark Side of America’s Favorite Health Food

Kaayla T. Daniel, PhD, CCN, is "The Naughty Nutritionist" because of her ability to outrageously and humorously debunk nutritional myths. She earned her PhD in Nutritional Sciences and Anti-Aging Therapies from the Union Institute and University in Cincinnati, is certified as a clinical nutritionist (CCN) by the International and American Association of Clinical Nutritionists in Dallas, and serves as Vice President of the Weston A. Price Foundation and on  the Board of Directors of the  Farm-to-Consumer Legal Defense Fund.
In 2005, Dr. Daniel received the Weston A. Price Foundation's Integrity in Science Award.  Dr. Daniel’s book, The Whole Soy Story: The Dark Side of America 's Favorite Health Food, has been endorsed by leading health experts, including Drs Russell Blaylock, Larry Dossey, Nicholas Gonzalez, Joseph Mercola, Kilmer McCully, Doris J. Rapp and Jonathan Wright. Dr. Daniel has been a guest on the Dr. Oz Show, NPR’s People’s Pharmacy, ABC’s View from the Bay, and Discovery Channel’s Medical Hotseat. She has been quoted heavily in the media, including Washington Post, San Francisco Chronicle, London Observer, London Guardian, Toronto Globe & Mail, Vancouver Sun, Bon Appetit, Alternative Medicine, Townsend Letter, Mat und Helse (Norway), Men's Health, E, Glamour, First for Women, Woman's World, Utne Reader, EnergyTimes and other publications. Online, she has been featured prominently as an “Inner Circle” expert on www.mercola.com, the world’s leading dietary and natural health website.
Dr Daniel has also spoken at numerous professional conferences, including BoulderFest, Wise Traditions and the National Association of Nutritional Professionals (NANP).Based in Albuquerque, NM, Dr. Daniel is a nutritionist in private practice, the mother of two children, and enjoys playing the organ, ballroom dancing, firewalking, hiking and yoga.   Her website is www.naughtynutritionist.com.

What Happened to Ethics in Pediatric Medicine?